FROM THE ARCHIVES: How the Class 802s will avoid the fate of Voyagers on the Devon Sea Wall 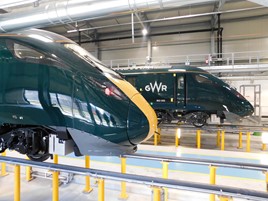 The Class 802s are designed mainly to operate on the London Paddington to Devon and Cornwall services, replacing High Speed Trains. All will be in service by the end of 2019.

An initial order for 22 five-car and seven nine-car trains was placed in March 2015 (RAIL 770). A further seven nine-car trains were added last year following delays to the electrification of the Great Western Main Line. In total, 236 vehicles are on order, in addition to the 378 Class 800 vehicles Hitachi Rail Europe (HRE) is delivering for GWR.

HRE is building the trains in Italy because its Newton Aycliffe facility (near Darlington) is at full capacity assembling 56 Class 385s for ScotRail and 110 Class 800/801 Intercity Express Programme trains for GWR and Virgin Trains East Coast.

HRE spokesman Sam Fisk told RAIL on February 14 2017 that tests have been carried out to ensure the ‘802s’ can withstand rough weather on the Dawlish Sea Wall section. When weather is poor, or there are rough seas, Class 220/221 Voyagers are currently unable to run along the route.

Fisk explained that brake resistors positioned on top of the roof of the HRE trains are partly raised, whereas on a Voyager they are in a well. He said rigorous testing has shown that water brushes off the raised component. The exhaust pipe is not connected to any electrical supplies, so any water that does go down it does not affect the train.

He added that because the vehicles are also powered independently, should there be a failure somehow caused by the water, the train can still continue in traffic.