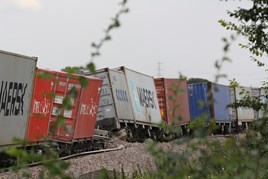 The accident happened at around 1430, when 11 wagons of the 33-wagon 1133 Felixstowe-Doncaster intermodal derailed but remained upright.

The driver of the train was reported as safe and it has been confirmed that no one was injured. No cause has yet been identified into the accident, which has blocked the line from Ely to Peterborough.

Buses have been laid on to run between Ely and Peterborough. CrossCountry trains between Birmingham New Street and Stansted Airport and East Midlands Trains’ services between Liverpool Lime Street and Norwich are both terminating at Peterborough.

The derailed train was being hauled by GB Railfreight 66713 Forest City. The wagons will need to be lifted by crane, with some missing bogies.

A warning that shortfalls in track inspection could be far more widespread than just those that led to a derailment at Sheffield on November 11 2020.