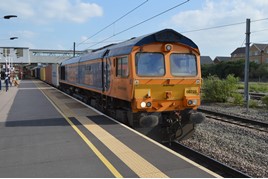 The total volume of rail freight lifted between July and September 2018 (Q2 2018-19) was at its lowest Q2 figure since at least 1996-97, according to Office of Rail and Road (ORR) statistics released on December 18.

However, the ORR’s figures show that the amount of freight moved in the quarter increased by 2% to 4.4 billion tonne-kilometres (t-km), compared with the corresponding three-month period in 2017.

There was better news for domestic intermodal traffic, which increased by 0.4% to 1.73bn t-km year on year, and is now at its highest level since 1996-97.

DB Cargo UK recorded a 9% decrease in freight moved, from 3.5 million freight train kilometres (FTKM) run to 3.2 million, and its share of the rail freight market fell from 41% to 38% over the year.

GB Railfreight, however, recorded a 24% increase on the same measure, to 1.7 million FTKM, and Freightliner Heavy Haul experienced a 15% rise to 0.6 million. Freightliner’s other activities dropped by 4% to 2.3 million FTKM.

Colas Railfreight increased by 1% to 0.3 million FTKM, while Direct Rail Services was stable at 0.4 million FTKM.