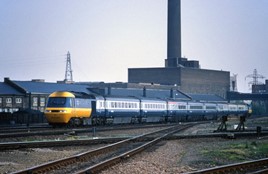 Marking the end of 41 years of High Speed Train operation on the East Coast Main Line, LNER is repainting a full HST in original ‘Flying Banana’ livery, with the Mk 3s in blue and grey.

The set will be used for a series of farewell charters on December 18-21, raising funds for the Campaign Against Living Miserably (CALM) charity with which the operator works regularly, and for which several LNER staff volunteer.

The final regular passenger service operated by an LNER HST is to be on December 15, although as this issue of RAIL went to press it was unconfirmed what the final working would be.

The charity trains will serve destinations visited by HSTs throughout their ECML careers. On December 18, it will run from Edinburgh Waverley-Aberdeen, followed by Inverness-Newcastle on December 19. On December 20, the HST will run from Newcastle-York via Leeds. The final train will be on December 21, when it runs from Leeds-King’s Cross calling at several stations on its way south.