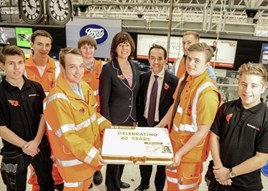 Introduced in 1974 as the Student Railcard, and renamed in 2008 as the 16-25 Railcard, it saves people a third off many rail fares, allowing them to travel for less to see family and friends. It also benefits those in apprenticeships.

Perry said: “It is fantastic to see that the 16-25 Railcard is continuing to play its part in this, by helping thousands of young people with the cost of travel.”