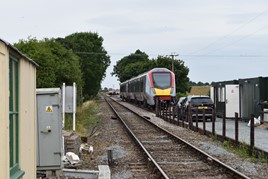 Forty-three brand new trains were stored at secure locations awaiting entry into traffic as RAIL 883 went to press on July 10.

Twenty-nine of the Class 345s are stored at Old Oak Common, with the remaining five at Worksop. The GA ‘745s’ and ‘755s’ are stored at Kimberley on the Mid-Norfolk Railway.

Meanwhile, more than 700 new vehicles are either stored at various depots, undergoing testing and commissioning, or awaiting acceptance. These include:

The introduction of these new trains is enabling operators to remove older trains from traffic. However, only about a quarter of the number removed from traffic have been sent for scrap, with the rest stored at locations including Long Marston, Potter’s Group (Ely) and Worksop.

As this issue of RAIL went to press, some 479 vehicles were stored, while a further 114 had been disposed of - 113 of those for scrap and one (a Mk 3 Trailer Guard Standard) preserved. However, the stored figure could reach more than 1,000 by the end of the year.