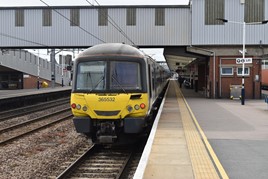 The Class 365 fleet is now the property of the Department for Transport. Currently 21 are leased to Govia Thameslink Railway, with 19 stored at Crewe South Yard.

The ‘365s’ were procured in 1994 under a unique financing model that was put in place by British Rail shortly before privatisation, which meant Government took ownership of the fleet at 0200 on August 15.

This was an agreement put in place so that should the rolling stock leasing company that owned the trains face financial difficulties, then Government would step in and take ownership so that services could continue running.

Eversholt Rail Group owned the ‘365s’. There is no suggestion that the rolling stock company has any financial concerns, rather that the clause has always been in place.

A RAIL source explained that discussions had been ongoing for most of 2019. The DfT has taken ownership of the fleet through a company called Train Fleet (2019) Limited. It is understood no more trains will revert to DfT ownership.

A DfT spokesman told RAIL: “Any train operators wanting to add capacity by utilising the trains not currently in use on the GTR network can present a business case to the Department in the normal way.”