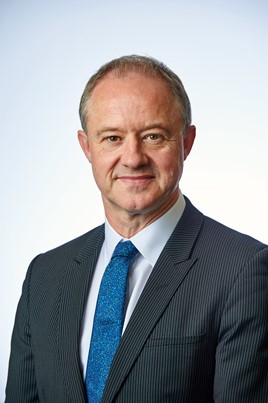 He will join NR at the end of his current role as Chief Executive of the Civil Aviation Authority (CAA) in early-Autumn. Haines replaces current Mark Carne, who announced his decision to retire earlier this year.

Before joining the CAA, Haines was Managing Director of the Rail Division for First Group plc. Prior to that he was MD of South West Trains. He will relinquish his current role as Non-Executive Director of Eversholt Rail UK Ltd. Haines received his OBE in 2016 for services to transport.

NR Chairman Sir Peter Hendy CBE made the appointment on behalf of the NR board. Hendy said: “He was the most outstanding candidate in a highly competitive appointment process. Andrew’s broad experience of rail and transport, and his reputation for relentless delivery and improvement makes him the ideal candidate to carry on with the transformation of Network Rail that has been led by Mark Carne.

“Andrew will drive delivery of the railway improvements set out in the strategic business plan for 2019/2024, ensuring Network Rail’s continuing focus on safety, performance and cost effectiveness, and thus delivering a better experience for the millions of passengers who travel every day on our railways.”

Haines said: “Since my first job as a left luggage clerk at London Victoria I’ve been passionate about improving the services that the railways provide to customers and the wider economy.”

Secretary of State for Transport Chris Grayling welcomed the appointment, saying: “He has done an outstanding job at the CAA, and has an impressive track record in the rail industry.  Under Andrew’s leadership I look forward to Network Rail continuing its transformation into devolved route businesses, working in partnership with train operators to improve performance for passengers.”

Haines’ salary will be £588,000 including benefits, which is 27% lower than Carne’s. The salary will be reviewed annually, and will have an ‘at risk’ performance-related pay element of up to 9% of basic salary. That will be dependent upon performance measured against safety, financial, asset management, project delivery and customer and train performance metrics.