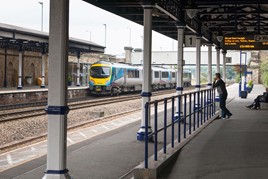 There is not enough money for both freight and passenger services on the revamped trans-Pennine route, members of the House of Lords were informed during a debate on January 7.

Lord Berkeley had asked whether proposals by Transport for the North to include capacity and capability for freight services would feature in plans to electrify the Manchester-Leeds route and, if not, what the alternative proposals were.

Baroness Sugg, the Government’s transport spokesman in the Lords, responded: “I absolutely agree that rail freight plays a vital role in transporting our goods around the country and in cutting congestion on our roads.

“Sadly, however, taken together, all the proposals for freight and passengers exceed the amount of work we are able to do over the next five years and, indeed, the £2.9 billion we have allocated.

“Where we are doing electrification work, we will also ensure that it is future-proofed for freight. And we have enhancement works east of Huddersfield which can provide more capacity for freight movements that use the main trans-Pennine route.”

The Government was criticised by Lord Snape for making decisions for the North, rather than devolving to Transport for the North.

Sugg replied: “We absolutely listen to Transport for the North when making these decisions. That is a vital role which it plays for us. We are carefully considering its proposals.