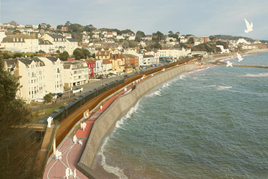 A 360 metre-long, 7.5 metre-high sea wall will be built just west of Dawlish station to strengthen the Great Western Main Line in Devon against extreme weather - if the Government commits the £35 million that it is expected to cost.

Network Rail submitted a reserved matters planning application for the extended sea wall to Teignbridge District Council on February 4 - five years to the day since storms washed away an 80-metre section of the main line, cutting off most of Devon and all of Cornwall from the National Rail network and costing an estimated £1 billion in economic damage to the South West.

Subject to planning approval and government funding being granted, NR says it will take nine months for the work to be completed. It has already gone to tender for contractors, so that work can start as quickly as possible.

When completed, the sea wall will be 2.5 metres higher than the existing structure, and will have a wave return to help to send waves back towards the sea rather than over the railway. The promenade will also be wider. The plans have been developed with engineering contractor Arup.