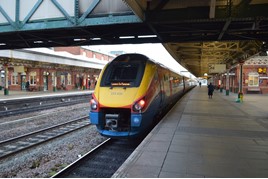 A Joint Venture between FirstGroup and Trenitalia UK has pulled out of the bidding for the East Midlands franchise.

In a statement, the companies said the decision was made so they could focus on a joint bid for the West Coast Partnership.

This leaves Abellio, Arriva and current franchise operator Stagecoach in the bidding for East Midlands, which is due to be awarded in April 2019 ahead of an August 2019 start.

The current deal is a Direct Award that is due to end in March next year, but there is an additional 1-13 reporting period extension available to the Secretary of State if required. A further DA is planned from March until August next year.

A FirstGroup spokesman said: “FirstGroup, alongside our bidding partner Trenitalia UK, has decided to withdraw from the East Midlands franchise competition in order to focus on our joint bid for the West Coast Partnership franchise. This is an exciting opportunity to be the first operator of HS2, as well as run conventional West Coast services from London to Glasgow.”

The Invitation to Tender (ITT) for East Midlands is due to be issued in late April and should be published in May.