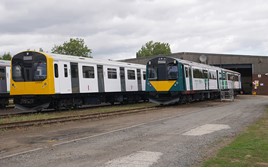 The first Class 230/0 for London Northwestern Railway was unveiled at Long Marston on August 21, as the deal for three two-car trains was confirmed.

They will start running between Bedford and Bletchley from December, with testing to start in the next few weeks.

West Midlands Trains Managing Director Jan Chaudry-van-de-Velde said: “I remember these trains from when they were on London Underground, but looking around the units there’s so much new equipment on board that they look and feel like brand new trains.”

Adrian Shooter, CEO of Vivarail said, “Both Vivarail and West Midlands Trains have worked tirelessly to bring this to fruition and I am delighted to show what we have achieved

“It is a proud day for me to see this first train roll out of our workshops and I am looking forward to seeing it at Bletchley depot in the near future.”

The LNWR ‘230s’ will have universal access toilets, USB sockets and ‘airline’ seats. They will be supplied as diesel multiple units, although there is the option to convert them to battery powered trains in the future.

Vivarail said the engines will automatically cut out in stations, while the lightweight aluminum bodyshells mean the trains use less fuel.

They will be maintained at Bletchley depot.