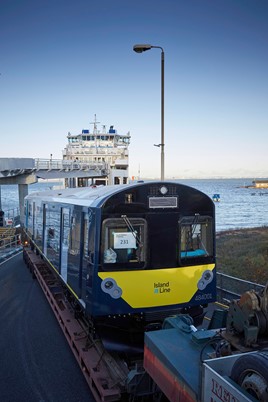 The first Class 484 ex-London Underground train has been delivered to the Isle of Wight, to replace the oldest rolling stock used on the national network.

It arrived on two Wightlink ferries from Portsmouth to Fishbourne on November 19. It was the first time “new” rolling stock for the 8.5-mile Island Line had been delivered since 1989.

The refurbished ex-District Line trains from Vivarail’s Long Marston workshop will replace worn-out vehicles built during the Second World War. They retain the London Underground seating layout, with lots of room for standing. They feature on-board wifi, charging sockets, passenger information screens and space for wheelchairs. Island Line promises they will be transformational for travellers.

The first new train must complete testing and fault-free running between Ryde and Shanklin before January 3, when the route will close until March 31. Track will be replaced, communications modernised, and platforms raised to enable level access.

A passing loop will also be built at Brading station, to enable services to run at 30-minute intervals. Buses will replace trains during the three-month closure.

All five two-car trains are due to be delivered by May.