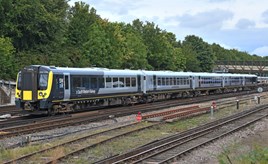 The formal launch of the new franchise had been delayed for a fortnight, to ensure it was not connected with Network Rail’s partial closure of Waterloo station to extend platforms ready for longer trains (RAIL 833/834).

However, signal and points failures related to the upgrade severely disrupted schedules. It meant the first train arrived 15 minutes late, as Secretary of State for Transport Chris Grayling stood waiting with leaders of FirstGroup and MTR, which had jointly taken over the franchise on August 20.

SWR Managing Director Andy Mellors said: “There are huge challenges running this railway, and this train came in late. We have to get this railway running better than it does, and I think today demonstrates what we need to do to deliver a better service for our customers.”

Network Rail said that as well as points and signal failures, performance was affected by two train breakdowns.