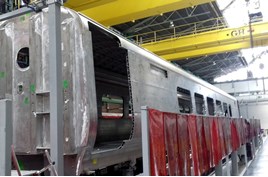 TransPennine Express has released an image of the first completed Mk 5A bodyshell in Spain.

A total of 66 vehicles are currently being built for 13-five carriage trains that will be operated by TPE.

They will enter traffic next year, and will run between Liverpool, Manchester, Huddersfield, Leeds, York, Scarborough and Middlesbrough.

These, along with the other new trains being delivered by TPE will provide 20,000 extra peak per day with more than 13 million seats being introduced across by 2019.

Built by Construcciones y Auxiliar de Ferrocarriles (CAF) in Spain and financed by Beacon Rail, the Mk 5As will be hauled by Class 68s also be owned by Beacon Rail and sub-leased from Direct Rail Services. The '68s' and Mk5As will be maintained at Alstom’s facilities at Longsight (Manchester).