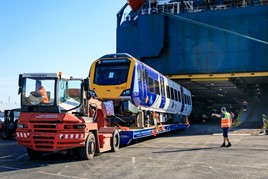 The first of 98 new trains for Northern has arrived in the UK.

Two-car diesel multiple unit (DMU) 195001 was unloaded at Royal Portbury Dock on June 25, and was moved by road to Edge Hill depot, Liverpool, on June 28. Testing on the main line will start in the next few weeks.

The CAF-built trains will allow Northern to withdraw its ‘Pacer’ fleet by the end of next year.

Ben Ackroyd, Engineering Director at Northern, said: “Getting the train onto UK soil is a major milestone in our modernisation programme.

“Northern’s engineering and operations teams have worked hard to produce a design that will deliver a real improvement in our customers’ on-board experience. I’m excited to see the first of them go into service at the end of the year.”

Mary Kenny, Eversholt Rail chief executive, said: “As owners of this new fleet of Class 195 trains, we are excited about moving into the next phase of the project and look forward to working together with our partners Northern and CAF on the UK commissioning and testing of these new trains.”