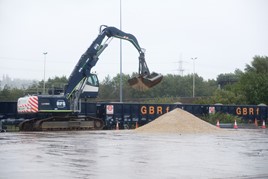 More than 150 trains will carry up to 235,000 tonnes of stone from the Peak District to the Birmingham site - the equivalent of more than 13,000 lorry movements.

Ten trains per week will each convey 1,500 tonnes of aggregate, which will be used to build a large piling platform for the Bromford Tunnel approaches, as well as embankments and haul roads around the site, cutting the number of HS2 road vehicles on public roads.

HS2 Ltd says that construction of the entire railway will involve up to 15,000 rail freight movements - or in excess of one million lorry journeys.

At the peak of Phase 1 construction post-2022, it is estimated that around 17 trains per day will serve construction, with other railheads including the logistics hub at Willesden, which will cater for up to eight trains a day from this year until 2024.

Network Rail’s HS2 Programme Manager, Freight and National Passenger Operators, Nick Cole said: “Network Rail has been collaborating with HS2 Ltd and its supply chain partners on the HS2 Materials by Rail programme for the past two years."