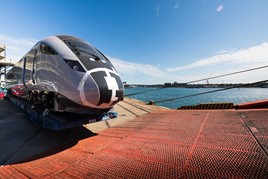 Five-car 802201 was unloaded at Southampton Docks on June 11, the first of 19 Hitachi Rail bi-modes destined for TransPennine Express.

Built in Kasado, Japan, it is part of an order financed by Angel Trains for 24 trains, with TPE using 19 and Hull Trains operating five.

The fleet was to have been largely assembled at Hitachi’s Newton Aycliffe facility, but delays to the Class 385 delivery meant production was switched to Pistoia in Italy, and Kasado. Seventeen ‘802s’ will be built in the former, seven in the latter. The switch in production is offset by the possible introduction into traffic earlier than was originally planned. Despite being built abroad, Hitachi said more than 30 UK-based firms are supplying components, such as wheelsets from Lucchini Unipart Rail in Manchester.

They 19 Class 802/2s will run between Liverpool Lime Street/Manchester Airport and Edinburgh Waverley, running via the East Coast Main Line on a new route for TPE. The operator has not ruled out the possibility they could also run on the West Coast Main Line (RAIL 851).

The Hitachi-built fleet will enter traffic from next summer, and offer an additional 161 seats compared to the existing three-car Class 185 used currently.