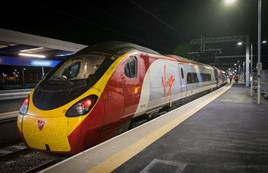 The first ever electric train to run to Blackpool North entered the station on the night of May 14, on a test run ahead of the May timetable change (when electric operation is introduced at the station).

And to mark the occasion, Virgin West Coast created a sand model of the train on Blackpool beach, in anticipation of three additional round trips from Blackpool North to London Euston starting on May 21.

Virgin West Coast General Manager Michael Stewart said: “We’re really excited to have reached this landmark by welcoming our Pendolino train to Blackpool North. This will allow us to test the infrastructure, as we prepare to launch our new electric services to and from the resort.”