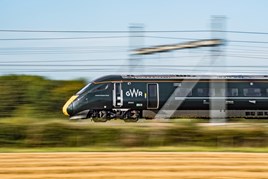 RAIL understands that the planned date is October 16, and that two rostered duties have been planned, with one train starting in Bristol and finishing in London, and the other starting in London and completing the day in Bristol.

GWR confirmed that duties had not been finalised, and that details already published were from original plans that have since changed.

Spokesman Dan Panes was unable to confirm the exact plans. However, times have appeared on RealTimeTrains suggesting that on October 16 an IEP will operate:

A second duty planned for an IEP, starting the same day, will be: