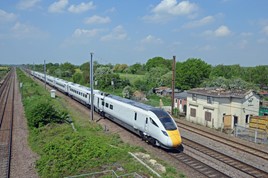 Azuma Intercity Express Programme trains will be introduced on the London King’s Cross-Leeds route from December.

The same duty also includes a return visit to Hull, and will release the unrefurbished former East Midlands Trains High Speed Train currently used by VTEC (NL65), according to sources.

After that diagram, the next three Azumas will replace three Class 91/Mk 4 duties from late December 2018/early January 2019, according to RAIL sources.

Introducing the Azuma fleet requires the completion of a power supply upgrade in the Doncaster area. This is fully costed and funding is in place.