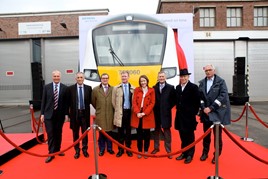 The final Class 700 has been completed by Siemens in Krefeld, Germany, meaning all 115 electric multiple units ordered by the Department for Transport for the Thameslink programme have been built.

Eight-car 700060 was the final EMU to roll off the production line, and will move to Wildenrath for testing before moving to the UK by May. It means 1,140 vehicles have been built.

Rail Minister Jo Johnson called the completion of 700060 “an important milestone” in the Thameslink programme. During peak production at Krefeld two vehicles per day were completed.

The first ‘700’ was completed some five years ago, and the EMUs entered traffic with Govia Thameslink Railway in June 2016, and as of March 9 there were 102 in the UK (996 vehicles) of which 99 were in traffic. Siemens says 68 trains per day are in traffic, completing around 800,000 miles per month. The fleet has achieved 8.5 million miles in traffic so far. The manufacturer said the 100th set was due to be accepted by GTR next week, with all 115 due to be available by traffic by the summer.