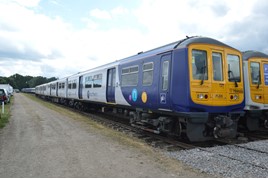 The return of high-speed logistics for the UK railway forms a key part of Rail Operations (UK) Limited’s ambitions.

Speaking exclusively to RAIL, Chief Executive Officer Karl Watts said that a new company, Orion, had been formed under the ROL umbrella.

“It’s about modal shift from road to rail. We looked at this a few months ago. We recognised that actually this never worked in the past as the timings never worked.”

Watts plans to make use of some of the 4,000 passenger vehicles being sent off-lease, and has signed an agreement with Porterbrook to lease two tri-mode Class 769 FLEX units for this work. Orion is also interested in High Speed Trains, as well as electric traction.

He told RAIL that for the logistics market, speed is essential: “We looked at parcels operations, although I prefer to call it logistics. On secondary routes we think 100mph would suffice. By these I mean off the premier routes. The premier routes are the East Coast and West Coast Main Lines - the Anglo-Scottish routes. These need 125mph for the paths ideally.

“When talking to potential customers, we have found that we need credible timings. Network Rail has told the freight industry that paths need surrendering and several thousand have been given up, but the capacity is there if you can live with 125mph Pendolinos or Azumas. We need to get going, fast - and then keep going.”