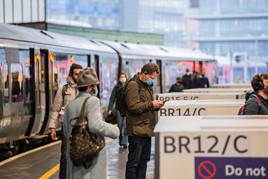 Government needs to encourage people back to public transport - and to rail in particular - with affordable ticketing, including flexible tickets for commuters.

That‘s according to a survey by Campaign for Better Transport, which says that failure to do so would lead to a car-led recovery, risking the country’s climate change targets and affecting the economic recovery.

The Rail Delivery Group said train operators want to support a green economic growth across the UK and used the results to highlight its own calls for ticket reform.

Results, published today, showed private car use will likely remain around the same levels as pre-COVID, with around a 1%-3% increase depending on the activity.

However, while the proportion of people intending to use public transport once restrictions are lifted is very similar to pre-damages numbers, this is likely to be affected by the kinds of journeys people need to make.

“Cars are the main contributor to carbon emissions and lethal air pollution, so returning to a car-dominated transport network is simply not an option post-COVID,” said CBT Chief Executive Paul Tuohy.

The survey found that less crowded services (30%), cheaper tickets (29%) and better routes (29%) top the public’s wish list if they are to use public transport again.