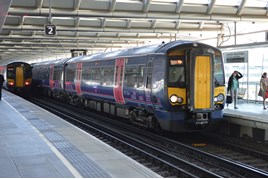 Class 377s transferred from Govia Thameslink Railway and Southern have started to enter traffic with Southeastern.

The four-car electric multiple units will provide an extra 68 carriages for SET, with all due in traffic by the end of November. They will offer an extra 5,000 seats into London in the peak.

The deal has been done via the Department for Transport. It means all the ‘377/5s’ ordered by Southern and sub-leased to First Capital Connect (and later GTR) have still to work for the operator almost a decade after they were first ordered.

Rail Minister Paul Maynard said: “We are committed to getting passengers across the country on the more comfortable, reliable and efficient journeys that they want.”

The introduction of these EMUs means more peak-time trains on the Maidstone East route can feature Class 375 or ‘377’ Electrostars, and some trains can double in length.

Trains to Hayes, Bexleyheath, Woolwich, Sidcup, Bromley South and Grove Park can be lengthened from eight-car to ten-car trains, and from six to eight-car trains, as Class 465/466 Networkers internally cascaded by the Electrostars can be used there.