EXCLUSIVE: What next for 'Staycation Express?'

Was this article useful?
8 people found this useful 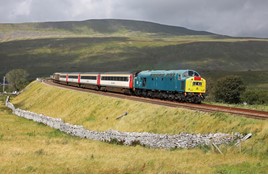 A decision has yet to be made on whether or not the ‘Staycation Express’ will run again next year, according to the train’s director.

Adrian Quine, Director at Rail Charter Services, which promoted the daily Skipton-Appleby trains over the summer, told RAIL it is “too premature to say: ‘this is what we’re going to do’, or indeed if we are going to do it again”.

However, Quine, speaking exclusively to RAIL on the penultimate week of operations, added that passenger numbers had “exceeded expectations” and that he was hopeful of repeating the operations again, subject to there being a positive outcome once he has been able to analyse the business fully.

“We’ve seen a huge increase in our own projections in terms of passenger numbers. We were full on the 1218 today and the schools have gone back,” he said, adding that many trains in the final week had sold out ahead of time.

The daily charter trains over the Settle-Carlisle Line (S&C) ran from July 20 for eight weeks (RAIL 909). The trains were not aimed at enthusiasts, with Quine claiming that the charters have helped to open the wider railway industry to a new market.

Quine claimed the Rail Delivery Group and the Department for Transport were also supportive of the scheme, with the series of trains helping to take the charter industry “into a new territory”.

He added: “It shows there a role for bespoke rail operation. These types of charters take the industry away from the one size fits all approach. It is exciting when rail can experiment and unleash its potential for the benefit of the UK economy and tourism.”

If services are not clean and reliable, then passengers may not return warns Rail Minister

"We need to, as an industry, rapidly evolve our rail offering for commuters" - Trainline COO Jody Ford

This perfectly describes my relationship with algebra at school, when I was 15. It drove me, and everyone else, out… https://t.co/K1M2UY5cEP