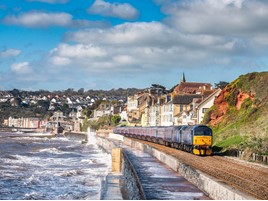 Rail Operations Group has agreed a deal to use MoD Bicester as a storage facility.

Speaking exclusively to RAIL, the company’s Chief Executive Officer Karl Watts said: “Bicester is massive. It has 5,200 metres of storage, and we will put anything there.”

As context, the site could hold 266 23-metre Mk 3 coaches, or 65 four-car electric multiple units (each vehicle being 20 metres).

Storage of rolling stock is set to be big business in the near future, according to Watts, which is why ROG set up Traxion last year. Traxion is one of four companies set up to deliver separate parts of the business, concentrating on storage.

Already the company has siding space at Castle Donington and Crewe South Yard. The latter is electrified and home to Government-owned Class 365s that Traxion is contracted to maintain in warm storage.

“Fleets are coming off-lease, and we are gearing ourselves for that,” said Watts. “Finding a place with wires up is a Godsend. We will continue to hunt, and we are looking at one or two places to put up the wires.”

Watts told RAIL that the company has to keep the stock ‘warm’ while owners explore opportunities for the trains.

He added that he had been in discussion with the Department for Transport regarding the 19 Class 365s stored at Crewe: “Their long-term future is doubtful, but there is potential in the short-term for them, as we saw in Scotland.”

Meanwhile, ROG is looking for a suitable facility for the business, following the decision to acquire two Class 769s for freight duties. There is the possibility that the company could leave UK Rail’s Leicester depot, where its fleet is currently based. Watts confirmed that ROG wants its own maintenance facility, but that no location has been decided upon.

While the ‘37’ and ‘57’ are the last diesels expected to join the fleet, Watts also did not rule out the possibility of using electric locomotives “if we could find a use for them”.

He highlighted how 42% of the national network was electrified, but acknowledged that it would have to be the right work, ideally with no locomotive changes required.