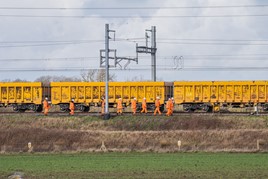 He also claims that the railway is far more wasteful than other industries in the way it spends money.

“Between 50% and 60% of the money spent is efficient… 40% is not. Ten per cent will probably never be spent efficiently, leaving 30% we can do something about,” he said.

“Senior civil servants accept this. These numbers are not disputed. It won’t be fixed until Network Rail is properly economically regulated. The Office of Rail and Road is great at safety but has had little impact on the economics.”

Robertson says productivity could be improved by resolving people problems: reducing wage inflation and tackling a shortage of skills.

“The cost of people working in rail infrastructure has doubled in a period during which it has fallen in other sectors. It is the highest of any sector. That’s from government data,” he says.

“Train driver wage inflation is 6% a year,” he said. “But for signalling engineers it’s 9%. And high-voltage workers, 11% a year.”

If Robertson’s numbers are right, the waste from poor productivity and inefficiency undermines the economic benefits promised by HS2, Northern Powerhouse Rail and East West Rail.

“The railway is one of the best ways of creating jobs. I’ve been telling people to stop thinking of HS2 as just a railway and to think of it instead as a job creation scheme.

“Government is attracted to invest in the North, expecting that it will create construction jobs as well as operational jobs. It calls this levelling up. On the current trajectory, this will not happen.

“There aren’t enough skilled people in the North to build the railway. That shortage pushes up wages. We are not on track to deliver value for money. NSAR has cautiously estimated the economic value of HS2 jobs to be £6.3 billion. The practical impact of wage inflation would be to reduce the claimed economic benefits by 40%, or £2.5bn.

“The jobs are the economic case. But if we are creating them at massively inflated prices, the case is not there.”

Network Rail Eastern Region Managing Director Rob McIntosh agrees with Robertson on the shortage of skilled workers. He says 45% of his maintenance staff become eligible for retirement over the next ten years.

“We have to start growing the skills and capability we have now, to avoid productivity losses and wage inflation in ten years’ time. We will need different types of people and different skills to today.”