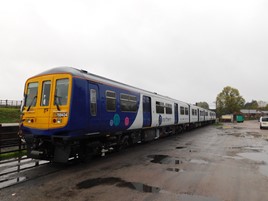 The first FLEX Class 769 bi-mode units will enter traffic with Northern in the first half of 2019.

The four-car trains are being converted from former Thameslink Class 319 electric multiple units, by fitting MAN engines to the driving vehicles.

Northern Managing Director David Brown told RAIL on October 9 that he understood the programme was going well, and that everything was in place to introduce the former ‘319s’ in the first half of next year.

Conversion work is being carried out by Brush Traction at Loughborough, with the first production sets at the facility. Engines were being fitted to 319431 (set 3) and 319424 (set 4) during RAIL’s visit on October 15.

Owner Porterbrook is behind the concept of fitting engines to the trains. Commercial Manager Mark Isbern, talking exclusively to RAIL, said that the plan was for two per month to be delivered once the production line was in full swing. As well as eight for Northern there are a further five on order for Transport for Wales, while Great Western Railway has 19 tri-mode FLEX units on order (diesel and AC electric as well as third-rail equipment).

Isbern confirmed that a second production line will be created at Loughborough in November, to support the increasing order book.