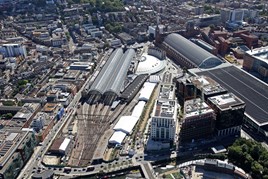 The total cost to Network Rail of the King’s Cross remodelling project has been slashed by up to £100 million, according to NR’s London North Eastern and East Midlands Route Managing Director Rob McIntosh.

The large savings were made following his decision to defer the project (which had been due for completion by January 2019) by a further year at a stage-gate review held in January 2016.

With the project at GRIP 3 (option selection) in NR’s eight-stage Governance for Railway Investments Process, McIntosh asked his team (led by Route Delivery Director Rob Cairns) to reconsider the engineering options and how they might more cost-effectively comply with technical specifications for interoperability (TSIs) for rail, including the clearance required between overhead line equipment and other structures.