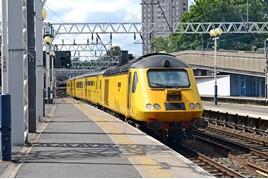 Rail Live is barely over for 2019… but already a major exhibit is being lined up to star at Britain’s leading outdoor rail event next year.

Network Rail’s New Measurement Train, the 125mph flagship of its monitoring fleet, is planned to appear at Rail Live 2020. The event will once again be held at the Quinton Rail Technology Centre at Long Marston, and will take place on June 17/18.

Based around a converted High Speed Train, the NMT has been described by NR as “the most technically advanced train of its type in the world”. It is used to survey the country’s principal main lines, using recording equipment including cameras, ground penetrating radar and lasers (RAIL 878).

“Network Rail will again have a big, if not bigger, presence at Rail Live 2020, which - with a fair wind - will feature our world-leading New Measurement Train,” NR’s Head of Media Kevin Groves told RAIL.

“Our intention is for Rail Live to become the rail industry equivalent of an international air show, where business, technology and the latest equipment is accompanied by a degree of glamour and excitement,” said RAIL Managing Editor and Events Director Nigel Harris.

“So, we’re delighted to already be able to say that Network Rail is intending to bring its NMT, a world-leading train that’s absolutely at the core of the infrastructure industry. We’ll be making many more announcements over coming months, so watch out for them - but put June 17/18 2020 in your diary now.”

The train will be open for inspections - a unique opportunity normally never available for visits.

You can already register your interest for Rail Live 2020 at the event’s dedicated website www.raillive.org.uk, which also has comprehensive details of the 2019 event.

Note that the presence of all exhibits, is subject to availability.