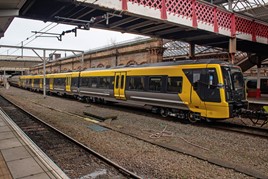 The 52-strong Class 777 order could be expanded, depending on the future size of the Merseyrail network.

Currently, 52 trains from 59 Class 507/508s are needed each day. When the new ‘777s’ are fully in service that figure will change to 50 trains from 52 - unless it’s a major event such as the Grand National, when all 52 trains could be required.

Merseytravel Programme Director David Powell told RAIL: “When we have all the new trains, we can then speed up the timetable and that reduces the number of diagrams. We need to get the new timetable in as soon as it’s ready.”

He said that Network Rail was still completing infrastructure work, including power modifications and signal sighting.

As for additional new trains, Powell explained: “As things stand, we don’t have to get any more during this concession, which runs until 2028. There is an option for up to 60 additional trains, and if that was to happen it would be an exciting world.

“We wrote a Long-Term Rail Strategy about five years ago. If we manage to deliver all that’s in there up to the 2040s, that is how we would need 60 trains, and we will order more trains.”

Network Rail has introduced sniffer dogs to try to reduce the theft of signalling cables in the North West.