EXCLUSIVE: Engine testing about to begin on Flex Class 769s 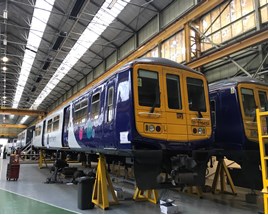 This process will allow engineers to discover and remedy any issues before engines and alternators are fitted to the first Class 319 electric multiple units that are at the site.

Testing will be carried out in a bespoke facility adapted for the scheme. The engines and alternators to be tested initially are pre-production samples and will not be fitted to a main line ‘769’. They will remain in situ throughout the conversion process to enable Wabtec, MAN and ABB engineers to assess and rectify any issues found during testing.

Once testing is complete, it is expected that Unit 1 (319456) will be fitted with its components in September or October.