EXCLUSIVE: Armitt: no economic case for carrying parcels by rail 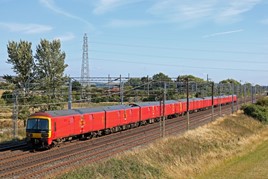 That’s the verdict of the man tasked with producing a report advising the Government on its future freight strategies.

Speaking exclusively to RAIL, National Infrastructure Commission Chairman Sir John Armitt CBE claimed the rail freight industry “is up against it” and that “everything is going against rail freight” at present.

“I think it would be very surprising if rail carries parcels in the future. I was at Network Rail when EWS lost the contract for carrying Royal Mail traffic. Why did they lose it? Well, because the lorry was something like £45 per tonne and rail’s lowest offering was £75 per tonne. You come up against those hard realities and I think that is going to continue to be a challenge for rail freight.”