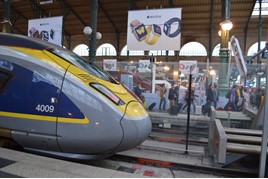 Cross-Channel operator Eurostar has told RAIL it is having constructive conversations with Government on Brexit, and will continue to do so.

The operator serves France, Belgium and Holland, and plans to increase its services to Amsterdam next year.

Spokesman Rob Haycocks told RAIL on December 14: “At this point in time, we plan and expect to maintain services on the existing basis and timetable following Brexit.”
The comments come after Secretary of State for Transport Chris Grayling said in a Commons Written Reply on December 12 that Government was committed to the continued success of the Channel Tunnel.

Grayling was responding to a question from Catherine McKinnel (Labour, Newcastle-upon-Tyne North), who had asked about the safeguarding of cross-border freight.

He replied: “The Government has agreed in principle the terms of the UK’s smooth and orderly exit from the EU, as set out in the Withdrawal Agreement. The UK has also agreed with the EU the broad terms of our future relationship as set out in the outline Political Declaration.

“This includes a commitment to agree bilateral arrangements with Member States to ensure the continued smooth functioning and operation of services through the Channel Tunnel.”