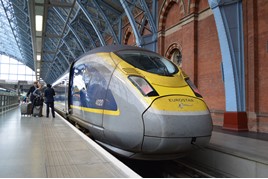 Eurostar and Thalys have proposed a merger designed to create a European high-speed travel company.

The Green Speed project has been presented to the boards of both companies, although it requires approval not only from them, but also consultation with the representative bodies of the employees and European Commission regarding merger control.

Between them, the two companies operate in France, Belgium, Holland, Germany and the UK. Combined they run 112 trains each day, carrying more than 18.5 million passengers per year. Eurostar celebrates 25 years of Anglo-French operations on November 14, while Franco-Belgian high-speed operator Thalys started running trains in June 1996.

In a statement posted on the Eurostar website, CEO Mike Cooper said: “This is an exciting development for our customers as it will enable us to offer you a more extensive network, increased connectivity and frequency of service, and a fleet operating on renewable energy."