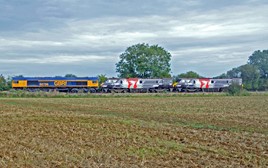 Up to 20 Class 91s could be exported to Eastern Europe for freight duties.

Europhoenix has purchased two of the electric locomotives for initial trials abroad, and more could follow as their career on the East Coast Main Line draws to a close.

EP owner Glenn Edwards told RAIL on October 4 that the locomotives would work in permanent pairs, with the blunt ends coupled together. Currently, ‘91s’ are not suitable for heavy freight haulage duty, so in partnership with Voith they will be re-geared to a lower rating to enable them to operate in this manner.

The first EP ‘91s’ have received the company’s livery, and were hauled from Bounds Green to Leicester on October 5. Both are currently stabled at the UK Rail Leasing depot and will remain there until ready for export. The conversion work will be carried out on the European mainland.