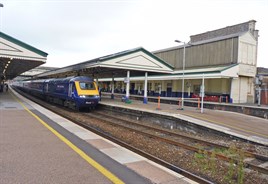 The economic study into the electrification of rail services to Plymouth and Cornwall published today (November 25) says the return to the South West economy could be £100 million a year - £6 billion over a 60-year appraisal period for new infrastructure – with faster journey times for passengers.

The study for the Peninsula Rail Task Force says electric trains are cheaper, faster and more reliable to operate than diesel. Going electric would save at least £1bn in operating costs over 60 years and coupled with enhanced services could generate as much as £20 million a year in additional revenue for the train companies.

There is concern that the Peninsula will suffer because the Government and Network Rail have no current plans to extend electrification beyond the current planned roll-out to Bristol and South Wales.

Councillor Andrew Leadbetter, Chair of the Task Force, said: “By 2017 the South West Peninsula will be the only region without the big benefits from mainline electrification. We need a firm commitment from the Government and Network Rail that the Peninsula will go electric and when.

“The cost of inaction is huge. As the only region left out of the plans for electrification, rail travellers to and from the Peninsula face the real risk that they will be travelling on obsolete diesels while the rest of the country enjoys an upgrade. It could cost the Peninsula economy £73 million a year.”