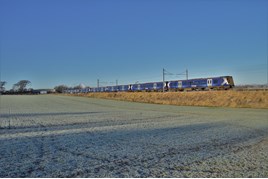 The first trains were the 0830 Glasgow Queen Street-Edinburgh (formed of 380004 and 380114) and 0830 Edinburgh-Glasgow (formed of 380020 and 380113). The first arrival into Glasgow was one minute early, and the first arrival into the Scottish capital was four minutes early. It is planned that electrification will speed up journey times on the route.

ScotRail Alliance Managing Director Alex Hynes called the start of electric services “another key stage” in the plans to build what he has repeatedly said will be the best railway Scotland has ever had.
All electric trains will be seven-car formations initially, providing more capacity, although First Class is being withdrawn in the short term.

Hynes said: “Being able to run some services with seven carriages will mean more seats for our customers. We will also deliver some faster journey times.”

Humza Yousaf, Minister for Transport and the Islands, said: “The introduction of electric services is a key milestone in the Edinburgh-Glasgow Improvement Programme, and yet another sign that our £5 billion investment to 2019 is helping build the best railway Scotland has ever had.”