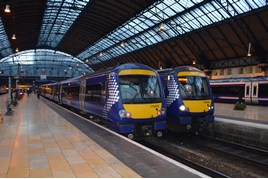 Electrification of the Edinburgh-Glasgow route is expected in October, Network Rail confirmed on June 14. This means that should the line be energised on time, electric trains will be running one year later than had been planned on the route.

The day before, NR spokesman Nick King had told RAIL that the company was reviewing the implications of the overhead line equipment failure on completion and energisation. NR told the Scottish Government it had made a number of personnel changes and a 20% increase in infrastructure delivery resource in order to achieve the revised date of October.

Scottish Transport Minister Humza Yousaf said: “This has inevitably resulted in a knock-on impact on the testing, approvals and driver training programme for the new ScotRail Class 385 trains.

“While this delay is extremely disappointing, I am pushing Network Rail to fully support and maintain the December 2017 milestone - full electric service on the Edinburgh and Glasgow via Falkirk High route with new, faster, longer Class 385 electric trains."