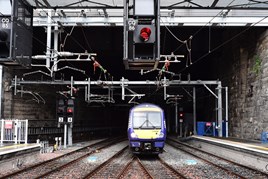 Electrification on the Edinburgh-Glasgow via Falkirk High route was energised on September 2, ahead of the first electric trains running in passenger service this December.

The 46-mile route is the first of four phases of the Edinburgh-Glasgow Improvement Programme (EGIP) to be energised. However, the electrics will enter traffic a year later than planned.

A ScotRail spokesman told RAIL the plan was for Class 380s to begin testing on the route from October, once the safety testing process that started on September 2 was complete, with the Hitachi Rail Europe-built Class 385s then entering traffic from December.