Easter target for Eurostar to Amsterdam 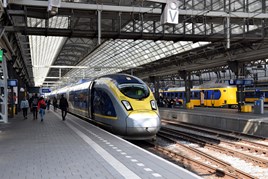 Eurostar has told RAIL that it aims to start running London-Amsterdam trains from Easter 2018.

At around that time (March), Chief Executive Nicolas Petrovic will be leaving the company to join Siemens, although an exact date has yet to be confirmed.

The company said growth was propelled by a significant increase in passengers from outside Europe - particularly from the United States, which had grown 24% year-on-year. Other overseas markets grew 18%. This has been attributed to taking advantage of the favourable exchange rates.

Christmas bookings are also up, with a 29% increase on the festive holiday period compared with last year.

Sales revenue is the value of the ticket bookings made during the period. This revenue is only recognised in the income statement at the date on which the passenger actually travels.