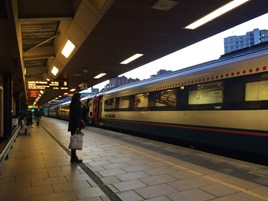 The proposals were included in EMA’s response to the now-closed consultation run by the Department for Transport (DfT) for the next East Midlands franchise, which is expected to commence in August 2019.

EMA says that changing current service patterns between Nottingham, Birmingham and Leicester, and Nottingham, Derby, Stoke and Crewe to include a stop at East Midlands Parkway would make it easier for passengers and staff to access the airport, which is four miles distant.

With over 7,000 employees and 90 businesses based there, EMA is one of the largest employers in the region, and it is expecting passenger numbers to double to more than 10 million per annum in coming years.

Having opened in January 2009, East Midlands Parkway station is operated by East Midlands Trains and currently has two northbound services per hour (one to Nottingham and one to Sheffield) that call within seven minutes of each other, and two southbound services to London St Pancras that call within eight minutes of each other. There is also an hourly local stopping service between Leicester and Lincoln.

But with just 300,000 passenger journeys made to and from East Midlands Parkway last year, EMA says the airport cannot reach its potential without significant service improvements.

Howard Ebison, EMA’s Commercial Director, says: “As the East Midlands’ gateway to the rest of the world, both in terms of passenger flights and facilitating international trade through our significant cargo operation, we play a key role in driving forward the East Midlands economy. “Our location is key to this, but a more joined-up approach to transport planning is necessary if the potential for the East Midlands to become one of the most connected regions in the country is to be realised. We already have great access to the motorway network but, while our road connectivity is good, getting to us via other modes of transport is not as easy. The airport could be within reach of a larger population if East Midlands Parkway was better-served by more trains connecting a wider destination.”

Other priorities listed by EMA in its consultation response were a reduction in journey time to London to 90 minutes from Nottingham and just 60 minutes from Leicester, a renaming of the station to better reflect its proximity to the airport, and joint train/bus tickets to and from the airport promoted via National Rail ticket booking services.