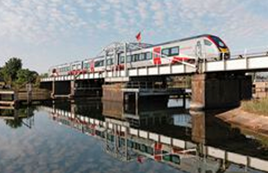 Internal components on the bridges at Somerleyton and Reedham on the Norwich-Lowestoft line, and at Oulton Broad on the Lowestoft-Ipswich route, have not been replaced in more than a century. Frequent repairs are required, with NR stating that £100,000 per bridge is spent in maintenance.

The upgrade, which begins on the Reedham and Somerleyton structures next February, forms part of a £5.5 million programme of work.

NR will replace the winch system, hydraulic jacks and pipework, and lighting across the bridges, as well as installing a new power system. It’s expected that this will make the bridges easier to maintain for the next 25 years and should save NR a combined £7.5m in future costs.

Brand new trains built for Greater Anglia, but still no confirmation of when they will enter traffic