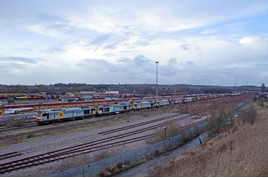 The planned HS2 station at Toton could open several years ahead of schedule, and before the arrival of HS2 Phase 2b in 2033.

East Midlands Hub, located on existing railway land between Nottingham and Derby, would open to classic services during the 2020s. New road infrastructure and the construction of an adjacent ‘innovation campus’ and Garden Village housing development would also be brought forward.

The announcement follows a meeting between East Midlands Councils, Midland Connect and Secretary of State for Transport Chris Grayling, with a commitment made to working towards achieving four key outcomes.

These include early construction of the station and associated residential and commercial developments, but also relocation of the Network Rail/DB Cargo depot at Toton and creation of a delivery body to maximise the potential of the innovation campus (which could support 10,000 jobs) and Garden Village.

Midlands Connect and East Midlands Councils have also pledged to continue lobbying the Department for Transport to build a link between the Midland Main Line and HS2 Phase 2b, to enable classic compatible trains to run to the north of England from places such as Leicester.

“HS2 will become the backbone of our national rail network supporting growth and regeneration, bringing passengers faster journey times, and delivering an estimated 74,000 jobs and adding nearly £4 billion to the East Midlands economy by 2043,” said Grayling.