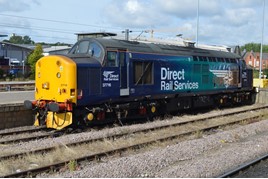 Direct Rail Services is to be merged with the remainder of the Nuclear Decommissioning Authorities’ transport and logistics portfolio, to simplify structures across the group.

DRS is owned by the NDA but has operated independently to other parts of the business.

Managing Director Debbie Francis will leave her role at DRS on March 1, with Chief Operating Officer Chris Connelly taking over the role on an interim basis. Francis will help to support the creation of the new transport business over the next few months.

In a statement, the NDA said: “As part of wider efforts to simplify structures across the NDA group, the NDA has decided to bring its extensive transport and logistics capabilities together.

“The UK has long been a global leader in this field, particularly through the expertise that currently exists within the NDA’s subsidiary organisations - International Nuclear Services (INS), Direct Rail Services (DRS), and the INS subsidiary Pacific Nuclear Transport Ltd (PNTL)."