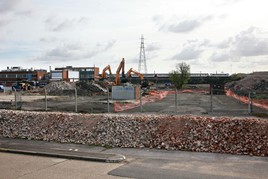 A decision over the future of Greater Anglia’s planned Brantham depot, which is due to open in December to stable and maintain new trains, will be made in the first quarter of this year.

An internal newsletter, seen by RAIL, includes an update from Franchise and Programmes Director Mike Kean, who states: “I am conscious that there have been several rumours about the future of this site which can be damaging. I wanted to give an honest update on where we are.

“We have been working hard on it for over a year but still have issues with the landowner selling the land, delivery of the connection and achieving acceptance of how it will operate. Due to this we are looking at alternative stabling sites to accommodate the new trains as well as other locations for a wheel lathe. We are continuing to develop Brantham, but if we cannot solve the land issues we will need a plan B - this is well under way. A further review of Brantham will happen in Q1 of this year.”

On January 15, GA told RAIL: “There remain a number of issues to be resolved to ensure delivery of our new depot at Brantham. These include the preparation of the site, the link line to access the site and the fact that we have yet to agree commercial terms with the landowner involved.  We are therefore looking at alternative options for the maintenance and cleaning that is due to be undertaken at Brantham, in case we need to alter our plans.  We expect to be able to confirm the next steps, either with Brantham or, if necessary, a new plan within the next three months.”

GA had previously told RAIL on January 3: "“There is no change and no new developments. The project is currently still moving forward with no change to the plans, though we are still finalising the commercial agreement with the land owners. Major investment is taking place in Crown Point anyway because that’s the main base for the Stadler trains.”