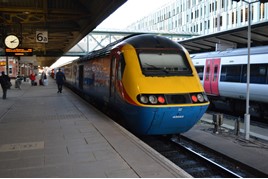 Discussions continue between East Midlands Trains and the Government over the future of rolling stock beyond January 1 2020.

The current fleet of High Speed Trains used by EMT is not due to be modified to meet disability access regulations that come into force from that date. This means that eight eight-car HSTs owned by Porterbrook and three six-car HSTs owned by Angel Trains, recently cascaded from Grand Central, will not be able to operate beyond that date, leaving a significant hole in the East Midlands fleet.

The current EMT franchise, owned by Stagecoach, is due to finish in March 2019, but is likely to be extended to August that year. Government intends to issue an Invitation to Tender for the franchise in April.

EMT told RAIL that unless there is a change to the plan, or an extension beyond August, it could say little other than that it is “assisting the DfT in determining suitable options going forward”.
An EMT spokesman said: “We are aware of the upcoming changes to regulations regarding the accessibility of rolling stock, particularly the HSTs currently operated by East Midlands Trains.”
“Our current franchise is stated to end in 2019, and therefore decisions beyond that time are a matter for the Department for Transport. However, we are engaged with the Department to support a smooth transition.”