Disabled users have their input on new Greater Anglia trains 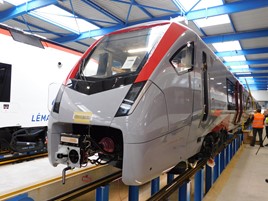 A group of disabled rail passengers and professionals has visited Stadler’s Bussnang factory to examine the new fleets being built for Greater Anglia.

The manufacturer and operator wanted to showcase accessibility features on the trains, and test prototype ramps that will be fitted. A wheelchair user, a blind person and a visually impaired person with a guide dog made the trip to Switzerland.

A previous visit had resulted in suggested adjustments being made. One such change was installing an additional emergency button at floor level in the accessible toilet, and installing a ‘modesty screen’ between a raised section of seating and a disabled section on the trains.

While in Switzerland, the group tested prototype ramps and suggested modifications to the design to make it easier for wheelchair users to get on and off the trains.

Wheelchair user Dominic Lund-Conlon, Transport Project Lead at Essex County Council, said: “Achieving the standards set out in law is one thing. Greater Anglia has gone much further than this, working in partnership with stakeholders to achieve a train that will work across much of the disability spectrum as possible."