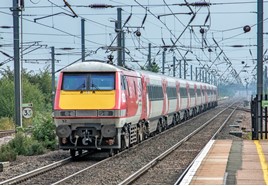 Asked about his thoughts on NR’s Digital Railway programme, he said: “In the next three Control Periods, two-thirds of signalling needs to be replaced, and that for me is the fundamental driver of the decision on this.

“If we don’t make a decision in the next few years, then we risk potentially losing the opportunity to reduce operating costs, provide additional capacity, and potentially reduce journey times probably for two generations. It’s that which creates the burning platform - it’s not that there’s new technology that’s around, it’s that if we don’t do it now, if we’re not very careful we’ll be sucked into maintaining conventional equipment for a long time, on certain routes anyway.”

Haines told the Transport Select Committee that resignalling schemes such as the southern section of the East Coast Main Line, the Trans-Pennine route and Wessex were insufficiently developed for ringfenced funding to be allocated at the moment.